The yellow broom (Retama sphaerocarpa L.) is a shrub belonging to the Fabaceae family. It is native to North Africa and the Iberian Peninsula. Very common in almost the entire Peninsula, except in the Pyrenees, Cantabrian Coast, Galicia and much of Portugal.

It is a shrub that can reach 3 m in height, generally devoid of leaves, greyish and highly branched. It has (or not) alternate leaves, linear lanceolate, early deciduous. The flowers are papilionaceous, very small, 5-8 mm long, grouped in clusters. Calyx 2 to 3.5 mm, bilabiate; the upper lip deeply bifid, and the lower one divided into 3 small sharp teeth. Ovoid legume, with a very little marked mucron, straw-colored. It is easy to distinguish by its linear leaves and, above all, by the number of yellow flowers it produces. Its production is so large that it can give the impression that it is a plant that only has a trunk and a lot of petals.

It usually grows in serial thickets produced by the degradation of holm oaks and in pine forests.
It is xerophilous, tolerant to winter cold and summer heat; it can vegetate in both limestone and siliceous soils from 0 to 400 meters above sea level. It can form very extensive thickets, especially in Aragon, La Mancha, southern Extremadura, and Andalusia, where sheep generally graze, generally in degraded oak forests.
Pilgrims on the Camino de Santiago traditionally collected this plant to treat conditions of the respiratory system in the acute phase and in eruptive fevers. In Galicia it has been used to make brooms for sweeping and it was also used to heat the ovens of the tahonas.

CHEMICAL COMPOSITION AND BENEFITS FOR THE HUMAN BODY. [2]

This plant has a wide range of biological activities, including antibacterial, antiinflammatory, antioxidant, anti-proliferative, antiulcer, antiviral, and hepatoprotective activities.

An infusion of the flowering stems has been used to fight liver diseases and is said to be useful in the treatment of diabetes. Infusions of the branches have been used to treat heart conditions and haemorrhoids. The leaves, stems and tender buds are used to treat colds and respiratory problems, stomach aches, to promote menstruation (and sometimes abortions), and treat conditions of the urinary tract.

The aerial parts of the plant are a highly valued remedy in the treatment a range of bone and muscular conditions, being used in the form of poultices, ointments and plasters to treat wounds and injuries (including broken bones), sprains, dislocations, muscle aches, rheumatism, arthrosis, bursitis and tendinitis. They are also used to treat skin problems and as a remedy for insect and snake bites.

The bitter-tasting stem can be chewed, or the juice of the stem applied to the tooth as a treatment for toothache and a protection against decay. A decoction of the stem, or sometimes the roots, can be used as a mouthwash.

A decoction of the flowering stems has been used to rid the hair of lice.
The seedpods are used as a treatment for diarrhoea. The seedpods and seeds have been used to treat malaria.
The chemical composition of this plant has not been very studied, although there is a recent revision of it
It possesses alkaloids derived from Quinolizidina (Norlupinano), which are characteristic of the Fabaceae family and of the genus Broom. The branches contain mainly sparteine and retamin, while the flowers are rich in lupanine, Retamia and Cytisina; and seeds in Cytisina.

Also present are the Esferocarpina and Anagitina. It also contains fatty acids Ω-3 and ω-6, sterols, and aliphatic alcohols, mainly in seeds, and flavonoids. This species has been consigned as diuretic, tonic, and laxative. The alkaloids it contains have uterotónicas activities, stimulant/depressants of the respiratory system, antipyretic and hallucinogenic, and has flavonoids antimicrobial and others with cytotoxic activity against cervical cancer cell lines.

Below are some of the uses of the plant (Retama sphaerocarpa L.) outside the medicinal field.
• The branches and tender buds were thrown inside wells, cisterns and even puddles, with the intention of purifying the water. This practice was carried out only in certain months of the year and was also reinforced by adding bolus lime (quicklime) and maintaining the process for between 30 – 40 days. The observation that larvae and insects were eliminated with this custom, led it to be held as highly recommended. The branches have also been added to water that had a bad taste – the flavour is greatly improved. [2]
• The fresh, aerial parts of the plant are said to be an effective insect repellent, especially against flies, wasps and fleas. The branches can be hung in the room, or the ground can be covered with the flowering plant. Walking on the plant increases the effect, but the effect wears off as the plant dries. [2]
• The branches are used to make baskets, with a technique like that used for willows (Salix species). They are worked fresh, while they are flexible, without any previous treatment, except to clean them of all secondary stems.
• The flexible branches have been used as a tying material. [2]
• Harvested towards the end spring, the branches are used to make brooms. [2]
• The stems are also used as pointing implements and as divining rods for locating underground water. [2]
• The seeds, used when freshly harvested, are strung to make necklaces. [2]
• The dried seedpods are used as rattles. [2]
• The plant ashes are said to make an excellent laundry whitener – the clothes are soaked in the filtered water obtained from the boiled ashes and then left in the sun for a few hours. [2]
• A yellow dye is obtained from the stems. [2]
• The wood, especially the branches but also the trunk and roots, is often used for fuel, burning well and giving off a good heat. It is said to be especially useful for traditional bread ovens. It is a fuel of choice for traditional potters, who would often burn it whilst still green so that it produced abundant smoke – this smoke produced a gilded film upon the ceramics. It is sometimes used to make charcoal, but this is not considered to be of very high quality. [2]
• It was used green, as firewood to produce abundant smoke and thereby allow the fixing of a golden film gives on ceramic glazes, in processes of elaboration of a typical product of the area, which is called “golden reflection ceramics”. [3]
• Due to its calorific power and ability to generate flames, it has been used to singe the hairs of the pigs in the slaughter and that these did not show up in the bacon rind. [3]
• In the rural architecture of the central-western regions it is locker has been a well valued item. It was widely used in the construction of shepherds’ huts, or charcoal burners. Has been very frequent to take advantage of its branches to make roofs, shade trees, tenadas, arbors or sheds. [3]
• Sometimes they were mixed with straw and at other times they were put as filling and insulating material for roofs. Ceiling of the huts was also made with this plant, due to its durability and ease of adaptation, as well as because placing the twigs face down was achieved in a simple way that the water of rain trickled down to the ground. [3]
• Occasionally it has been used to finish off the walls of orchards and as a protection to prevent the crossing of cattle or the attack of other animals. [3]
• The branches have been used for hair care, as hair cosmetic. It was also highly valued aromatic plant, for its good smell. It was crushed and mixed with vinegar and paprika, and with that product they cleaned home. [3]
• The fruits served as rattles as entertainment for young children, since the seeds once ripe and dry they remain free inside the fruit and with the movement they simulate a natural maraca. [3]

R. sphaerocarpa is distributed throughout north-western Africa (Algeria, Tunisia, and Morocco) and the Iberian Peninsula. In the latter they are found from sea level to 1,400 m altitude, in semi-arid and dry ombroclimate. The most frequent ranges of mean annual temperature and mean minimum temperature of the coldest month in which the populations of R. sphaerocarpa are found are between 13.5 and 17.5 ºC and between –0.6 and 7.8 ºC. , respectively, while the average annual and summer precipitation varies between 320 and 750 mm and between 20 and 65 mm, respectively.
In peninsular Spain it grows in Catalonia, where it is rare, Aragón, Navarra, Castilla León, Castilla-La Mancha, Extremadura, Comunidad Valenciana, Madrid,
Murcia and Andalusia. It is not found in the Canary Islands or in the Balearic Islands. It is a tolerant species to any ecological condition of the Mediterranean climate, except for very cold temperatures and excess humidity. Also indifferent to the soil, it appears on various substrata: slate, arkose, marl, limestone, or gypsum, but rarely on granite.
It preferably grows on the glacis and foothills of the mountain ranges, plateaus, and edges of the great pluvial valleys, in dry and clear places: banks, sunny slopes, clearings of holm oaks or other Mediterranean forests, degradation thickets, ravines, uncultivated land, etc. It occupies spaces in the zonal areas of Quercus ilex and Q. faginea, as well as in intra-zonal areas of psamophiles and rupicolous or glericola. The broom forms formations that are sometimes very extensive, mainly on gently sloping land previously devoted to cereal crops and which, after being abandoned, is used for pasture, preferably sheep. In the brooms of the centre of the Iberian Peninsula, the density of plants of this species ranges between 250 and 1,000 feet ha-1, giving a sparse cover, which is completed with herbaceous grassland in the background, sometimes accompanied by small camephytes. This broom is known for its role as a nurse species since it facilitates the establishment of herbaceous and woody due to changes in the microclimatic conditions under its canopy. 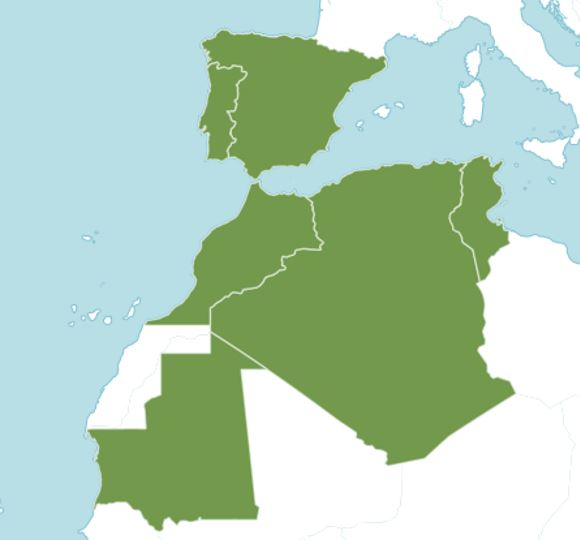