It is broadly found in the Southern America in the area of rainforests. This plant was known as a treatment for inflammatory disorders. Cat’s Claw is a thorny vine that has ability to climb higher than 100 feet. The name was given according to the shape of the thorns that are reminding of cat’s claws. Uncaria tomentosa is known as non-toxic plant at standard dosing levels, but it has to be mentioned that in some people it causes dizziness and headache, and in large amounts — mighty be toxic. The speed of its treatment qualities  depend on a characteristics of the pain but commonly it takes, approximately, 8 weeks to feel the effect, but such injuries as knee pain might be revealed within one week of taking it.

Properties of the Uncaria tomentosa.

It was originally used to treat asthma, abscesses, fever, urinary tract infections, viral infections and simple wounds, furthermore it was discovered that it is an immune system rejuvenator, antioxidants and antimicrobial agent. And all of these properties of  the plant can be explained with high percentage of phytoconstituents that are present in plant. Phytoconstituents are non-nutrient active plant chemical compounds or bioactive compounds and are responsible for protecting the plant against infections, infestations, or predation by microbes, pests, pathogens, or predators. Some are responsible for color, aroma, and other organoleptic properties. Phytoconstituents are synthesized in plants through primary and secondary metabolic pathways and many of them may be grouped as active drug constituents and inert nondrug constituents. A wide range of active components has been discovered and they have been divided into 16 main or more groups and the most important of them are alkaloids, terpenoids, phenols and phenolic glycosides, coumarins and their glycosides, anthraquinones and their glycosides, flavones and flavonoid glycosides or heterosides, mucilage and gums, tannins, volatile oils, saponins, cardioactive glycosides, cyanogenic glycosides, etc. Other relevant active constituents in plants, such as vitamins, minerals, amino acids, carbohydrates and fibers, some sugars, organic acids, lipids, and antibiotics, are essential nutrients. In addition to other functions, secondary metabolites produced in plants are used for communication as signal compounds to attract different pollinating agents including insects (honey bees, bumble bees, moths), birds, lizards, 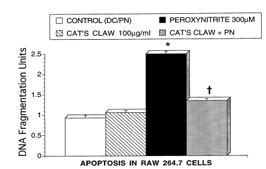 bats, etc. Classification of phytochemicals may be made based on their elemental constituents such as C & H; C, H & O; C, H, O, N, S & P containing compounds, O/N containing heterocyclic compounds, and other miscellaneous compounds. Some of these may be grouped as primary and others as secondary metabolites. Primary metabolic products consisting of C & H; C, H & O; N, S & P elements include hydrocarbons, carbohydrates, lipids, amino acids, proteins, nucleic acids, organic acids, etc. Genetic effects and environmental factors exert both qualitative and quantitative alterations of the active constituents in medicinal plants. — (oxindole and indole alkaloids, glycosides, organic acids, proanthocyanidins, sterols, and triterpenes) were found in the Cat’s Claw. The properties a of the Uncaria tomentosa were tested agonized various microorganisms and parasites, including pathogenic bacteria.

Previous studies found more than 50 different phytochmical molecules over different parts of the plant, that were successfully isolated. It was found put that leaves of Cat’s Claw contain higher C of  oxindole alkaloid comparing to its concentration in stem break and branches, that was found by Laus studies.  Presence of TOA ( tetracyclic oxindole alkaloid) and POA(pentacyclic oxindole alkaloid). These two are liable to isomerization that depends mainly on medium polarity, pH ands temperature. According to the new chemical studies that were working on a wild population of Cat’s Claw in Peru, new chemical variations signified existence of three specific chemotypes that produce different alkaloidal constituents. The first chemotype is mainly composed of POA with the insertion of D/E ring, second type consists of POA with trans D/E junction, whether chemotype 3 is made of TOA derivatives.

The root of  Uncaria tomentosa was used traditionally to stop inflammations, arthritis, infections, gastric ulcers.Also was documented to be used for blood purifications, the wounds were washed with the Cat’s Claw which allows skin healing and disinfecting  skin around the wound and the wound itself, besides that if was used to treat more serious cases such as kidney problem, asthma, menstrual irregularity and various abscesses. It was also mentioned as treatment of mental disorders such as anxiety. Summing up all the properties and impacts of the plant it is biological activity triggers the following areas:

Antioxidant  and Anti-Neoplastic activities   of U. Tomentosa.

What makes Cat’s Caw an antioxidant plant is presence of specific alkaloids and its monomers (flavan-3-ol) and polyphenol. The aqueous extract of the plant  reacts on oxidative processes, involving peroxinitrate. Hydroxybenzoic acids, proanthocyanidins acids hydroxycinnamic were responsible for protein radical scavenging  and anti-oxidant activities. U. tomentosa aqueous extract was found to protect against oxidative stress in human erythrocytes and relieve chronic intestinal inflammation  in rats Another in vitro study revealed that the cat’s claw prevented the inducible nitric oxide synthase (iNOS) gene expression caused by lipopolysaccharide, nitrite formation, cell death, and theNF-kappaB activation. Cat’s claw possessed a cytoprotective effect due to its ability to interact with the injurious oxidant, therefore, it may act on regulating cell death caused by indomethacin. U. Tomentosa extraction effects appeared to be anti-proliferated efficacy against colon adenocarcinoma and breast cancer. U. tomentosa hot water extract prevents inflammatory responses as well as tumor cell proliferation by inhibiting the transcriptional nuclear factor kappa beta  activation without interfering

POA isolated from Cat’s Claws was having an impacting on the lymphocyte proliferation-regulation factor released from human endothelial cells, besides TOA was proofed to reduce POA activity on these cells in a dose-related manner. The plant bark extraction stimulates  the in vitro production of IL-6 and IL-1 in rat alveolar and lipopolysaccharide- stimulated macrophages and suppressive activities on cancer cell multiplication appears to be due to apoptosis induction. U. tomentosa bark extraction reduced lung inflammation in all mice treated with the plant. Cat’s Claw showed remarkable antifungal efficacy against various anidulafungin, terbinafine and fluconazole-resistant  The antiprotozoal activity has been recently documented by Batiha et al against Babesia and Theileria parasites and this efficacy was attributed to its ability to digest harmful microorganisms. Therefore U.tomentosa could be a good complementary antiprotozoal herb.

The POA isolated from Cat’s Claws extract improved the cellular immune system, while the TOA suppressed this immunostimulating effect of this POAin vitro.

Notably, in vivo experiments revealed that U. tomentosa extracts exhibited immunomodulatory activity indirectly and promoted a higher provide of myeloid progenitors in the bone marrow as a result of the release of biologically active cytokines (IL-6 and IL-1). Mentioning cardiovascular activities  hirsutine isolated from the U. Rhynchophylla  extract was found to decrease intracellular Ca2+ concentrations in rat aortas by inhibiting the calcium channels and effecting calcium stores. TOA exhibit the Ca+2 channel blocking effecting, which resulted in low blood pressure and may affected the central nervous system.

U . tomentosa is reported to act as strong medical extract eliminated of AB plaques and it is considered as a potential plant for Alzheimer’s Disease therapy. This activity was attributed to the fact that the plant contains newly identified polyphenol components namely specific proanthocyanidins that  possess both “plaque and tangle” reducing and inhibitory effects.  Proanthocyanidin B2 (epicatechin-4-8-epicatechin) is one major cat’s claw-identiﬁed speciﬁc polyphenol that markedly diminished the brain plaque load and enhanced short-term memory in younger and older.

It is believed that POA generated from U.tomentosa triggers acts as immunostimulant, therefore the contact with immunosuppressive drugs such as: cyclosporine, azathioprine, daclizumab, basiliximab, mycophenolate, murmonab-CD3, tacrolimus, sirolimus, cortizolsteroids, prednisone. Probably any drug that is prescribed for autoimmune disease or organ transplantation should be cut.  immediately. 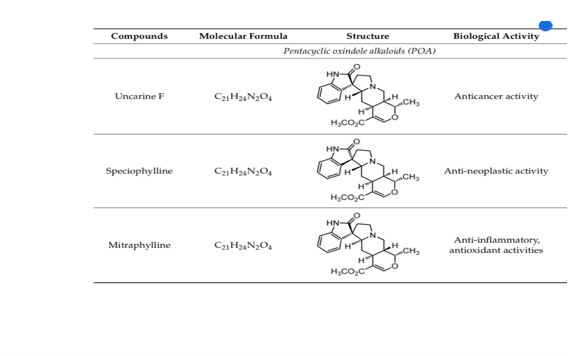 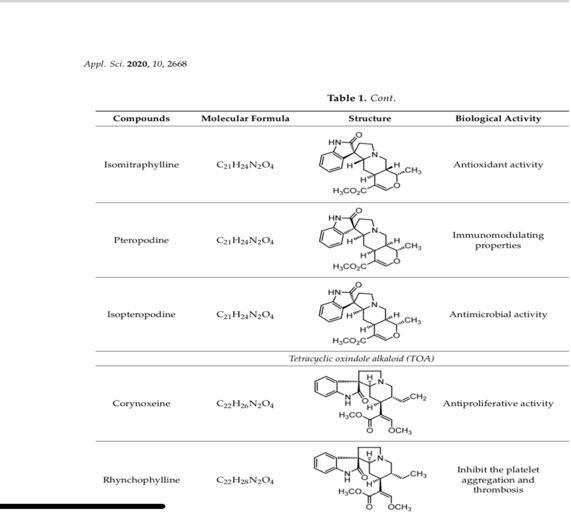 U.tomentosa was proofed to  have diuretic effect, it is contraindicated to be used with other diuretics as they act  as the same mechanism and thus increases the risk of electrolyte imbalance. Furthermore it has ability ti interact with  hormonal drugs, cholesterol lowering drugs that has an impact on kidney.

Hirsutine  extracted form Cat’s Claws was found to have a hypotensive effect therefore not recommended  to use by hypotensive people.

Cat’s claw prevents the microsomal CYP 3A4 activity, and thus, increased the serum levels of drugs that are metabolized by CYP 3A4 suchlike nonnucleoside reverse-transcriptase inhibitors, cyclosporine, and some benzodiazepines and increased the serious adverse  effects of these drugs moreover, the cat’s claw may interact with allergic drugs like fexofenadine, anti-cancer agents as paclitaxel, antifungals like ketoconazole, antiviral drugs, and oral contraceptives.

Based on the possible safety data, U. tomentosa extracts appears to be safe when administered to several cases of inflammation. Cat’s claw safety has not been documented in breastfeeding and pregnant women, or children under three years of age because if insufficient safety research.

Relations between Cat’s Claw and Covid

found that cat’s claw can be beneficial in the treatment of Covid-19, which contains four structural proteins, namely the spike (S), envelope (E), membrane (M), and nucleocapsid (N) proteins. The S glycoprotein of COVID-19 interacts with the angiotensin-converting enzyme 2 (ACE-2) receptor, facilitating the viral entry into host target cells. Cat’s claw components, according to studies, can prevent SARS-CoV-2 protein maturation and infection transmission by blocking the virus from adhering to human cell receptors (such as ACE-2) and disrupting the virus cycle. It’s also very important to include that it is recommended that some groups of people should avoid or limit their use of the cat’s claw, as the negative effects may intensify or have an impact on their health. Pregnant or breastfeeding women, people with specific medical disorders, and those taking certain drugs are among these groups of people. One of the reasons that pregnant or breastfeeding women should avoid taking a cat’s claw is that it is unsafe due to a lack of safety information.

The recommended dose of U.tomentosa is one gram given two three times daily. A standardized extract attributed to specific chemotype of this species chemotype of this  species consisting of less than than 0.5% oxindole alkaloids and 8% to 10% carboxy alkyl esters has been used in doses of 250 to 300 mg in several clinical studies. Average lethal dose for rats for a single dose or water extract from U.tomentosa is higher than 8g/kg. In humans, no toxic symptoms were noticed with frequent administrated of 350 mg/day for 6 successive weeks. Tinctures, decorations, capsule extracts, and teas are recently prepared from the cat’s claw.

The existing review investigates the medicinal activities and all photochemical molecules extracting from U.tomentosa, which is used in traditional medicine as a treatment option against wide range of health problems, inducing immune system deficiencies, neurodegenerative  disorders, cancer, chronic fatigue, Crohn’s disease, digestive complaints, parasitic and microbial infections, kidney cleanser, inflammatory problems, irritable and leaky bowel syndrome. Moreover, U.tomentosa has many photochemical molecules that are attributed to its therapeutic activities and exist in different degrees in the herb.