San Pedro mostly grows on west coasts of Andes in Peru on 2-3000 meters high, sometimes it is possible to find it in Chili and Argentina, even tho, it is cultivated now easily in different areas. It was traditionally used in tribes by the shamans because of the chemical compound called Mescaline, which is natural psychedelic drug. It has very alike effect on human organism with LSD, mostly gives hallucinations therefore it was used in different rituals long before. Besides this drug effect in normal prescript does it is a good analgesic.One of the uses of this unusual plant is the manufacture of aphrodisiacs. To create it, you need a small part of a cactus, only 3 g of dried peel. Keep in mind that the church does not approve of the Indian tribes from Peru, Ecuador, Bolivia use the cactus to achieve the state of “nirvana”. They are sure that this sacred plant delivers from the mundane, mundane and elevates to the spiritual. Also, without such a culture, fortune-telling, shamanic rituals do not occur, it is very popular in folk medicine of different tribes. Every year, shamans and sick people visit the places where the cactus grows to make a pilgrimage. There is a belief that if a person sincerely repents, then a sacred place will help his soul to be reborn, discover superhuman powers and be cured of the most serious illnesses way San Pedro is used. In ancient church records, it is described how shamans are immersed in a trance and can see the devil by drinking a drink from this cactus. In most of countries the plant is illegal but in some states it is still legal.

Wide stem with diameter approximately 15 cm, color may vary from the light green to dark green, might be 6 m tall and can reach to 1.8m meters, on the stem areoles are regularly spread, from each areole grows from  5 to 7 spikes. Ribs from 5 up to 14 are wide in the bottom, curved and deeply notched before whitish areoles. Branches and stems are vertical, most often expanding from one foundation with a diameter of. To 15 cm. Green stalkers darken with time, from the light color degrades to dark green or blue-green. Each spike is a condensed leave without water, San Pedro blooms in July, during the night time only in wild nature. The flower is quite large till 23cm length white color with dense aroma. The fruits of San Pedro are oval and elongated, dark green, approximately 3-6 cm. San Pedro can perfectly survive the shortage of water and in strong humidity. Quite often cactus San Pedro is confused with Trichocereus peruvianus (Peruvian Torch cactus), which is its relative in the genus Echinopsis.

Favorable soil for seed germination is a mixture of sand, peat and soil. The structure should look like loose substance. Before planting, the soil must be boiled, in order to avoid infection of the future plant with various diseases. Pots for growing should be chosen with drainage holes. Stop your choice on unglazed pots, they better absorb excess moisture from the soil. Temperature should be approximately between  25-28 ° C, this type of cactus is a moisture-loving plant, so do not forget about watering.

Sow the seeds on the ground, press a little into the middle and close tightly with a transparent plastic bag. But before that, spray it from the inside with a fungicide to disinfect the air. The main task for the successful cultivation of a plant is to achieve a moist, warm, light, sterilized environment.

You need to choose a sunny place, but not in direct sunlight, so that there is no burn. Periodically scroll the pot for active and uniform growth of the cactus. The period for which the first sprouts will rise is 14 days.If after 2 weeks the seeds have sprouted, in a bag that covers the soil, you need to make small holes so that the plants adapt to the external environment. Over the next month, we do not remove the package, but once a week you need to check the sprouts, pierce holes and disinfect with a fungicide from the inside. When the cactus is strong enough, you can remove the shelter, but do not forget about periodic watering. It can grow up to 30 cm a year. It is better to plant it during the warm season, it is better to put it on a windowsill.

Mescaline is a valuable substance that makes the San Pedro cactus so popular. Its highest concentration is found in the pulp of the peel. First you need to remove all the spines from the plant and peel off the top cover. Small pieces are taken orally. You can also try the cactus with other plants in a decoction called “cymora”. To do this, the cactus is dried and boiled. The concentration of mescaline can be different, it depends on top dressing, watering, lighting and temperature. The action of the hallucinogenic effect after eating a cactus begins in an hour and lasts 10-12 hours. In general, the influence of the San Pedro cactus on the human body is mild, not aggressive.

It contains alkaloids such as:

Mescaline is a psychedelic drug and entheogen, which is also found in some other species of Mescaline has been used for thousands of years and is best known as a drug used by some Native Americans in Mexico as part of their religious ceremonies. Peyote buttons are most often chewed, but they can also be mixed with water and swallowed. Sometimes mescaline is made into a powder and put into capsules and swallowed.  Mescaline formula. 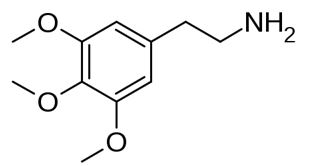 Anecdotal evidence suggests that the highest concentration of active substances is found in the layer of green photosynthetic tissue just beneath the skin.

Mescaline has a wide array of suggested medical usage, including treatment of alcoholism and depression, due to these disorders having links to serotonin deficiencies. However, its status as a Schedule I controlled substance in the Convention  Psychotropic Substanceso limits availability of the drug to researchers. Because of this, very few studies concerning mescaline’s activity and potential therapeutic effects in humans have been conducted since the early 1970s.